In 2003 Mr. Kurt Heinlein started a journey to find the right terroir to make his dream come true: "Establish a familiar winery to honor his ancestors and at the same time leave a legacy to the future generations".

After several trips travelling many miles within Mendoza's wine regions, he finally spotted the place to fulfill his long held desire.

San Rafael, the southern productive oasis of Mendoza, proved to be the best place to establish the estate. Just a glimpse of the stunning view that 330 ha (815,5 acres) of virgin land located at 831 mts. (2726 feet) next to the Diamante´s river banks at the foothills of the Andean Mountains were enough to realize he had found the ideal site.

In the same location where the first foundation of the city of San Rafael was settled, stands a statue of the Christ Redeemer which welcomes visitors and protects the fields of Funckenhausen.

By 2005, under the agronomic supervision of Mr. Franco Lucchini, the first 20 hectares of Malbec, Cabernet Sauvignon and Syrah vines were planted.

Last but not the least, K.H. decided rely on the professional expertise and excellence of the renowned winemaker Mauricio Lorca in order to produce year after year superior quality wines that strongly represent its origin.

This long endeavor which took so many years to accomplish gained the first line of wines the name of "LA ESPERA" ("The Wait"). 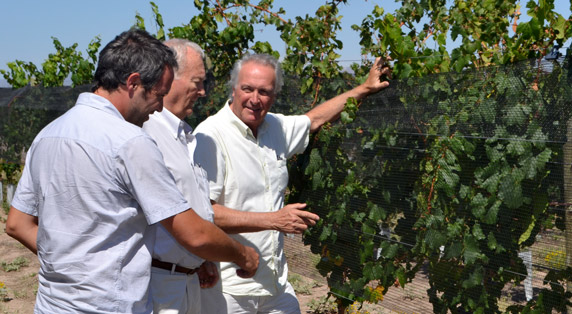 Funckenhausen is a fusion of German and Argentine identities, whose traditions and influences provide the love and respect for the land and natural surroundings in the region.

Over several family generations we were taught to believe in:

Funckenhausen seeks to become a reference for quality, highlighting the properties of the local vineyards, and in particular those of our privileged terroir. This is why we are highly committed and work hard to develop a sustainable use of the natural resources.

The location of our vineyards is core to obtain superior quality wines. Set on one of the highest areas in San Rafael (831 mts./2726 feet above the sea level) we benefit from a pronounced thermal amplitude and constant winds. A direct access to the Diamante river allows us to provide the vines with pure melt water from the Andes mountains.

Soils of sand, rocks and chalk with a low retention of water potential allow us to obtain outstanding grape clusters.

750 ml were not enough to represent the origin of this blend in a bottle.
Funckenhausen Malbec Blend offers in a littre bottle a seasonal blend of Malbec, Bonarda and Syrah with a composition that varies yearly according to natural conditions.

" A dream is forged with the noblest qualities of man and grows in strength, year after year, until it spreads its wings and flies in search of its destiny: A homeland to embrace it, a climate that raises it, the patient surrender to the process of time" – La Espera, a dream come true.

Discover all the Funckenhausen wines